YOU ARE AT: Business MK > News > Founder’s portrait returns home to law firm 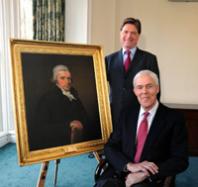 The portrait, which is thought to be around 250 years old, was shipped back to the UK last year from Sydney, Australia where it had been taken by Oliver’s father, John Howes, when he emigrated over 50 years ago.

Since its return, the painting has been cleaned and restored and is now ready to go on display again.

Richard Howes founded the law firm in Towcester in 1790. Although the Percival name did not feature in the name of the firm for the first century or so, it was Richard’s granddaughter Mary Howes’ marriage to Dr. William Percival that first brought the two families together.

Mary and William’s son, Thomas Miers Percival joined the law practice founded by his great grandfather and successive members of the Howes and Percival families remained partners in the firm until 2005 when Michael Percival, the seventh generation of the two families to be a partner, retired.

Howes Percival’s senior partner Andrew Barnes (pictured) said: "At Howes Percival we are very proud of our long history and we are truly thankful to Oliver Howes and his wife Pat, for their generous gift.

"In addition to receiving the portrait, we have been delighted to find out more about our founding father. By all accounts, Richard Howes was a fascinating character.”

Richard Howes is believed to have written a book on the history of Northamptonshire and to have been actively involved in local politics and good works. He died at the age of 70 while visiting a poorhouse.

"I hope Richard Howes, like me, will be very proud of the firm today,” said Mr Barnes. “Over the centuries, Howes Percival has grown into a full service commercial law firm with five offices in the UK, working across a wide range of sectors including energy, agriculture, leisure and tourism, development and construction, and retail.

“While we remain very proud of our heritage, our sights are set firmly on the future and on continuing to develop our business on both the regional and national stage."

Michael Percival (seated), who retired as senior partner from Howes Percival in 2005 after 40 years with the firm, said: "The Howes and Percival families have a rich heritage, between our two lines we can trace the succession of the firm through seven generations.

“The gift of Richard Howes’ portrait to Howes Percival has really helped to bring this long history to life. I had previously seen a small photocopy of this painting, but to see the original is absolutely fantastic."