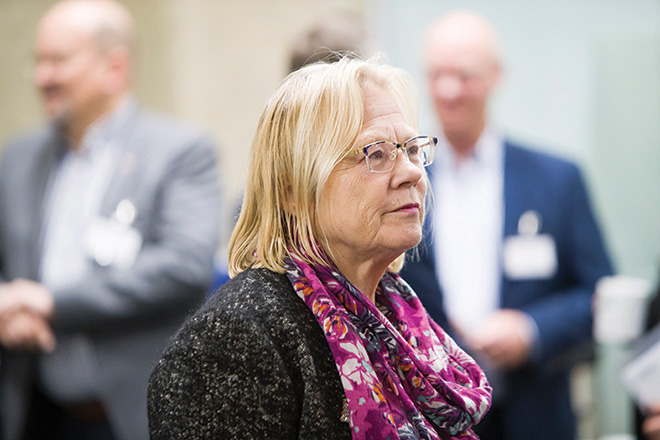 ANN Limb, the former chair of the South East Midlands Local Enterprise Partnership, has made history.

She became the first LGBT+ woman in the 112-year history of the UK Scout Movement to be appointed chair of the Scouts,  the largest mixed youth charity in the UK helping young people gain skills for life.

But it is not just the pioneering step in her career that has allowed her to be named top LGBT+ public sector exec role model but her work for decades to make the world a more inclusive place.

Being named the top role model for LGBT+ executives in the public sector has been particularly poignant for her, especially since she has, as she points out, lived through times in history where “acknowledging your sexuality or giving yourself a label in sexual terms have been so uncommon.”

“To be honest, it feels overwhelming and a surprise,” she told Yahoo Finance UK, when asked how it feels to be named as the number one role model in the list. “I’ve lived through this significant change in time, so this is particularly joyous.”

The 2019 OUTstanding LGBT+ Role Model Lists, supported by Yahoo Finance, are a powerful reflection of the achievements of LGBT+ people in the business community.

Individuals on the executive list work within at least three levels of the chief executive at large companies, or are the leaders of smaller organisations themselves.

Nominations were reviewed by the OUTstanding judging panel who scored each person on the influence of their role, their impact on staff inside and outside the workplace, and their business achievements.

“I think it actually helps to see that it’s more than just a role model ‘achieving’, but also be someone who people identify as someone who has done OK in their lives and can be examples of inspiration and being authentic is not an impediment.”

Under Ann’s chairmanship, the Scouts movement has instigated structural changes resulting in the appointment of Scouting’s first Equality, Diversity and Inclusion manager and a new UK commissioner for Inclusion, as well as raising awareness for LGBT+ inclusion.

Scouts now participate in Pride events across the UK, make Pride merchandise and materials available to Scouts and promote engagement with LGBT+ issues in the media. This year, Scouts ran the family area at Pride London, putting the LGBT+ community, diversity and inclusion at the heart of the movement’s skills for life programme.

While Ann has done so much for the 750,000 people the Scouts network reaches, her passion and long history of being a change agent in the educational space has bolstered her position as a role model.

She is also the first, and to date only, LGBT+ woman to have served as chair of one of the 38 Local Enterprise Partnerships (across England. She was also chair of the UK government’s LEP review implementation group and co-chaired the Prime Minister’s LEP Council.

In this role, Ann also chaired the first ever national LEP network event on diversity and inclusion, an initiative to engage more women and LGBT+ people on LEP boards.

She says that while a lot has been done to make society and businesses more diverse and inclusive, we have to focus on education to make sure we continue to make progress and bring intersectionality into the conversation more.

“We actually have a long way to go. There are challenges and issues and in specific areas – one is that there is still parental and familial resistance if any young person who doesn’t fit neatly into any recognised label – so it still starts at home and the family.

“Many young people face [these issues] and I’ve heard them speak of difficulties coming out to their family.”

These attitudes are “reinforced” by strong religious, institutional voices in some communities, she adds. The second area is making sure that businesses are being held accountable for the diversity and inclusion initiatives. She said, at the heart of everything, education from the family level to corporate level needs to be focused on.

“While the organisations are pushing for greater diversity and inclusion in all business and the workplace, it doesn’t mean that there are a lot of individuals that are experiencing daily incidence of prejudice.”