YOU ARE AT: Business MK > News > Former Olympics Minister reflects on London 2012 legacy 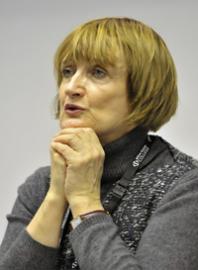 Speaking to a packed audience at Milton Keynes College, she said: “ I think everyone in Britain would like to bottle a little bit of what we were as a country” during the Games last year.
When it was first suggested that Britain should host the 2012 Games, Dame Tessa was in a minority of one around then-Prime Minister Tony Blair’s Cabinet table, she told her audience.
All her colleagues opposed the plan, as did the civil servants in the Department for Culture Media and Sport.
Even the then Prime Minister told her, “Isn’t Paris going to win it anyway?” she recalled in her speech.
Dame Tessa said she always believed that “the Olympics would showcase the best of modern Britain – a Britain where our diversity and our organisational and creative skills would be fully on display.”
During the Games she stayed close to Team GB, and as a Deputy Mayor of the Olympic Village lived in an apartment there during the Games. She recalled that on Super Saturday, when Team GB won three gold medals inside an hour, she bumped into a tall red-haired man and asked him in what event he was competing.
Two hours later and after wishing him good luck she had the surreal pleasure of watching Milton Keynes’ own Greg Rutherford win the Gold Medal for long jump.
Dame Tessa met and was questioned by a number of students at Milton Keynes College which has a growing reputation for sports courses.
She said that the greatest legacy of the games would be the creation of a new generation of leaders through sport.  She was “hugely impressed” with the young people she had met there who would be wonderful ambassadors for sport and for the city.
On the fantastic success of the games, Dame Tessa said: “It’s incredible what can be achieved as a group if you don’t mind who takes the credit.”
Milton Keynes College principal Dr Julie Mills said: “It is inspiring for students and staff at the college to hear how Tessa Jowell won thorough in the battle to host the games.
"Listening to her, we all realised how one person’s commitment to a cause can make such a difference.”