YOU ARE AT: Business MK > News > Football star goes for gold at London 2012 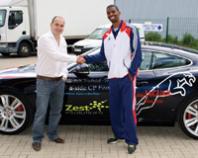 The Newport Pagnell-based IT firm is helping to fund Alistair’s on-going training, travelling expenses and clothing as he prepares to compete as part of the GB cerebral palsy football team.
The former QPR footballer almost lost his life in a serious car crash in 2006. He was told he would never walk again but, four years on, had recovered to the extent that he was selected for the England and GB CP team.
He was also accepted into the Jaguar Academy of Sport, which supports rising stars in their field, and was mentored by former England international Rio Ferdinand. He is expected to play in the GB team’s first match on September 1.
The Zest Solutions logo is now carried on Alastair’s Jaguar XKR car. Managing director Mick Sheehan (pictured with Alistair) said: “We are all amazed at Alistair’s achievements – he is an inspiration to us all. We wanted to show our support and help Alistair win a gold medal for Milton Keynes.”