YOU ARE AT: Business MK > Charity > Food heaven: Saints stars reveal their recipes for success to support club’s Foundation 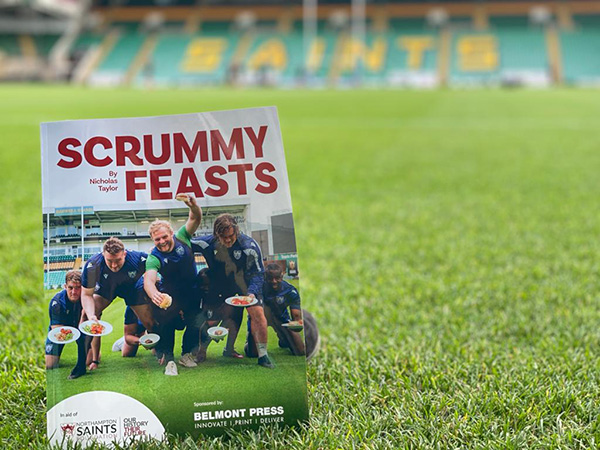 The book Scrummy Feasts has been published in time for Christmas and features recipes ranging from club captain Lewis Ludlam’s baklawa and Guyanese pepperpot to fly half Dan Biggar’s mushroom risotto.

The Saints have come together to share their favourite recipes, which they eat at the club, make at home or which the club serve on matchdays during the rugby season.

Fly half Dan Biggar reveals the recipe for his mushroom risotto

The book is supporting the Saints Foundation, which uses the power of sport to educate, inspire, and support young people and communities through a number of innovative programmes.

Nick Taylor, performance head chef for Northampton Saints, is the man behind the book. He approached the Foundation with the idea during the summer 2020 lockdown when he was working on menus for the team after hearing how charities all over the country were struggling with their fundraising capacities.

Nick Taylor, performance head chef at Northampton Saints and the author of the book

“We were thrilled when Nick came to us with the idea and it has been fantastic to be part of the project,” said the Foundation’s fundraising officer Sue Wright. “Nick has freely given his time and expertise to develop the book which is full of amazing recipes.

“It has been a testing year for Northampton Saints Foundation, as it has for everyone. We went into the new academic year knowing that funding and fundraising would be significantly reduced due to the pandemic yet the number of young people that needed our support would increase.”

The foundation has worked with creative design specialist WHP to design the book, which has been printed by Belmont Press. Both gave their services in support of the initiative, meaning every penny raised goes to the Foundation.

To pre-order a copy, CLICK HERE.  Scrummy Feasts will be on sale in the Northampton Saints store from December 6.