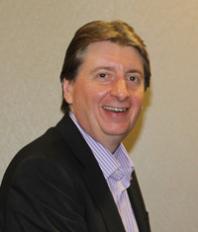 That is the message from the first published Milton Keynes Chamber of Commerce’s Quarterly Economic Survey, whose results were published yesterday (Wednesday).
Milton Keynes businesses continue to show confidence in both turnover and profitability over the next 12 months, views echoed by 88% of manufacturers.  Within the service sector 91% of respondents expect turnover and 76% expect profitability to improve.
More than nine out of ten service sector firms expect their workforce to either increase or stay the same, as do 75% of manufacturers. More than 85% of businesses attempted to recruit new staff during the last quarter of last year.
Milton Keynes Chamber chief executive Paul Griffiths (pictured) said: “The survey gives a positive picture overall and highlights the fact that businesses are entering the New Year with renewed optimism.
“Confidence is high and companies, particularly those in the service sector are now more willing to recruit and invest, leading to growth. It illustrates that Milton Keynes companies are playing their part in helping the economy to recover.”
Firms expect sales figures to build on the past two quarters with exports on the increase, the survey found.
It also revealed a clear improvement in the cashflow position for both manufacturing and service sector.
Inestment plans for manufacturing have improved compared to the third quarter, with 4% reporting an improvement in plans to invest in plant and 32% on investment in training. Meanwhile planned investment by service firms have remained static this quarter with 39% on plant and machinery, and 30% on training.
The survey also showed that 25% of manufacturing business and 27% of service businesses expected to raise prices in first quarter of 2014. Overheads is the key issue for manufacturers and service providers to raise prices.
Mr Griffiths said: “The government needs to ensure businesses have access to cashflow and introduce business-friendly initiatives if companies are to expand and truly succeed.”
The findings contain responses from 41 local firms.