YOU ARE AT: Business MK > News > Finance specialists celebrate at Dealmaker awards 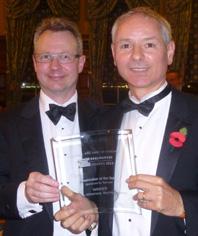 He is pictured (right) after receiving the award, the second Dealmaker of the Year accolade in five years for the MHA MacIntyre Hudson team.
The firm has advised on major deals including the MBOs of Daventry-based Master Abrasives and Rutland Cycling and the sales of Hitchin firm Custom Communications to Virtua UK and of European Filtration in Northampton to the Dutch company Affina Netherlands Holdings.
Mr Whitehead said: “It is a great honour to win the award and to be recognised by my peers.”
Grant Thornton’s Central and Eastern region Corporate Finance team was named Corporate Finance Advisory Team of the Year for the second year running and won Deal of the Year, for the third time in four years for its work on a £12 million management buy-out of claims management solutions provider Validus IVC.
Mr Hughes said: “It is a real accolade for the work of the corporate finance team to be recognised in this way, especially for two successive years.”
Grant Thornton’s corporate finance team has completed more than ten deals over the past 12 months, including advising the shareholders of Milton Keynes-based print finishing equipment manufacturer Morgana Holdings on the sale of the business to Plockmatic International AB.
Mr Hughes said: “We have seen a marked increase in new deal opportunities over the past 12 months, demonstrating that there is a sustained appetite for quality, well-managed business assets.”