YOU ARE AT: Business MK > News > Film buff savours his new work perk 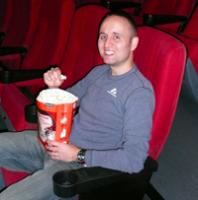 But when his Milton Keynes-based employer P&MM began to offer its staff Filmology cinema incentives as a work perk, Spencer decided to take his passion to the next level.
Spencer (pictured) set himself a challenge using the Cineworld Unlimited Card, which, as an employee benefit, P&MM offers staff for £135.24 per year.
“After seeing 80 films in the previous year, it made me wonder whether I could see over 100 different films in 12 months,” he says.
So, with a rough schedule in mind of about eight movies a month, a patient girlfriend and a lot of movie-loving friends, Spencer set off on his ‘quest,’ not only watching films but also reviewing them for his family.
He succeeded. He actually saw 111 different films, including 11 in a month in April and September. “Inevitably there were some great and some terrible films among them,” Spencer says.
His top five:  Inception, Kick Ass, Toy Story 3, the A team and The Social Network.
The worst, in his view: Greenberg, Jonah Hex, Skyline, The Girl Who Kicked The Hornet’s Nest and Ninja Assassin.
Yet his enthusiasm remains undaunted. “Seeing so many films has not put me off – I’m still going at least once a week,” Spencer says.