YOU ARE AT: Business MK > News > Festival marks arrival of London 2012 Olympic Torch 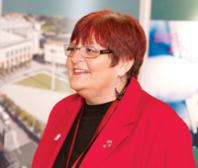 To mark the occasion, the town is hosting the Love Luton 2012 Festival on July 6-9. The festival promises to be one of the biggest events in Luton’s long and proud history and organiser Luton Borough Council is calling on business to play its part.
With huge numbers of people from the town and surrounding area expected to attend the festival, there are plenty of opportunities for businesses to reach tens of thousands of potential customers by placing their business name and logo in highly visible locations throughout the event and on all of its associated publicity.
Council leader Cllr Hazel Simmons (pictured) said: “Not only is this going to be one of Luton’s biggest ever events, but with national and international interest in the Olympic Torch Relay, the festival is guaranteed to generate massive media interest which will showcase the very best of Luton’s rich culture and heritage.”
The event includes a 20,000-capacity music concerts on the Friday and Saturday. The festival culminates in a spectacular carnival parade which will include an eye-catching and breathtaking procession through the town centre, before the arrival of the Olympic Torch and evening ceremony.
The festival concludes on the Monday as Luton says farewell to the Olympic Torch.
Luton Borough Council’s communications team has produced a sponsorship pack for organisations interested in being part of the event.
Sponsorship options include main stage advertising, naming rights, banners in highly visible locations, logos on festival merchandise and editorial in the festival’s souvenir guide. There are also opportunities to sponsor marquees, concert wristbands and much more.
Cllr Simmons said: "There are sponsorship packages to suit any type of budget so I encourage all local businesses – including smaller ones – to get in touch and see how you can get involved. Do not waste this golden opportunity.”
For more details, visit www.luton.gov.uk or contact Hannah Rees on 01582 54 73 25 / e-mail [email protected]