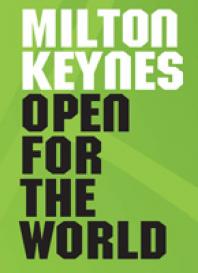 Many businesses in the city have already added their voice to the growing call for Milton Keynes to be included among the 15 venues in the bid.
FA inspectors toured the city in July and visited stadium:mk which would be extended to a capacity of 43,000. They were also impressed by the city’s open spaces – particularly the National Bowl and Campbell Park which were praised as suggested locations for ‘fan fests’ – allowing supporters to gather to watch matches on giant screens.
Hosting World Cup football in Milton Keynes would bring global prestige to the city. The 2006 tournament in Germany saw fans spending an estimated 20 million euros.
John Lewis (pictured), chief executive of Milton Keynes Partnership, said: “We do not need to spell out the economic benefits to local businesses in terms of inward investment, job creation and tourism. You only have to look at the statistics from Germany to know that the local economy will thrive under a global event of this magnitude.
“But businesses should also recognise the huge amount of prestige that the event brings with it. Milton Keynes is not seen as a capital city on a global basis but by showcasing us to the world we can achieve that status. If your business is based here then the World Cup will help put your company on the map.”
The FA visit in September is the second time the delegation has visited to check out our suitability as a World Cup host city for the 2018 tournament.
MK Dons FC chairman Pete Winkelman said: “One thing that was highlighted was the fact that Milton Keynes has an extraordinary ‘partnership’ approach which is so important when we are considering future development. We are confident that the businesses of Milton Keynes will be behind us on this bid because we know they are all so proud of this city, which is why so many have relocated here and why so many continue to move in on a daily basis.”
Milton Keynes is one of 15 areas competing to be a World Cup Host city if England is successful in staging the 2018 tournament.
To vote for Milton Keynes as a 2018 World Cup venue, visit the official England Bid website at: www.england2018bid.co.uk/hostcity/miltonkeynes