YOU ARE AT: Business MK > Growth Debate > Expressway plan ‘will be reviewed’, say Conservatives 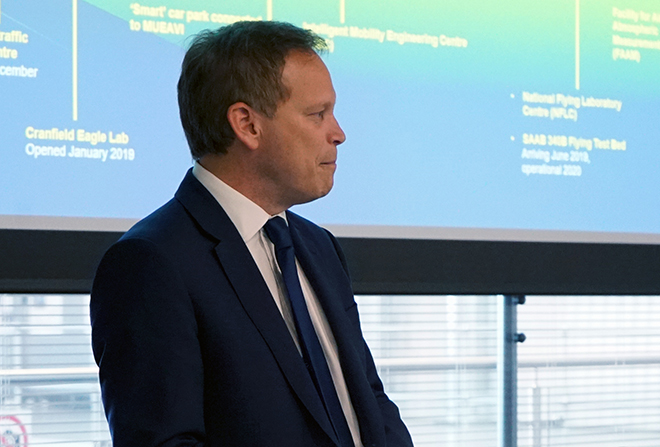 Grant Shapps, pictured on a recent visit to Cranfield University.

A REVIEW of the Oxford-Cambridge Expressway proposal will be a priority should the country elect a Conservative majority government, Transport Secretary Grant Shapps has said.

He was speaking on a visit to Milton Keynes with local Parliamentary Conservative candidates Iain Stewart and Ben Everitt.

The Conservatives will  look at alternative plans to the scheme. The party is already progressing East West Rail links in the Oxford-Milton Keynes-Cambridge arc and will examine ways to accelerate plans to reopen the former ‘Varsity’ line.

Mr Shapps said: “The Conservatives believe in protecting our countryside. The benefits of this project were always finely balanced against its costs, both financial and environmental. If re-elected we will review as a priority this scheme to ensure that it is still worth going ahead.

“We will not allow the scheme to proceed if there is not a strong case that it will boost jobs, prosperity and has local support.

“If a majority Conservative government is elected, we will develop this important strategic corridor which will be a driver of future prosperity, investing in the new East-West Rail link, local roads and new cycling schemes.”

Most of the eastern part of the route, between the M1 and Cambridge, already exists. The upgrade to the last remaining single-carriageway section, between Caxton Gibbet and the A1, will proceed as planned.

The Conservatives also plan to accelerate other transport schemes, including looking at plans to reopen the ‘Varsity Line’ from Oxford via Bicester, Bletchley, Milton Keynes and Bedford to Cambridge, now known as East West Rail.

Mr Shapps’ comments are in line with the party pledge that, if elected, they would launch a programme to reverse ‘Beeching’ cuts, initially backed by £500 million.