YOU ARE AT: Business MK > News > Expansion plans for city ‘could cripple infrastructure’, warn Conservatives 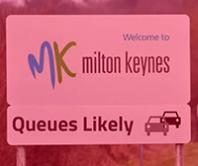 Local Conservatives have now insisted on a borough-wide survey to gauge public support for the expansion plan, warning that the fast grid roads and plentiful green space could be under threat.

The race to expand the popualtion is a core aim of the Labour and Lib Dem partnership that currently runs Milton Keynes Council, they say, and would mean a faster rate of population growth than the borough achieved in its first 50 years.

Milton Keynes took five decades to reach its current population and is widely regarded as the most successful new town. The council’s plan for another 250,000 residents would be 20 years quicker and without the oversight of the Development Corporation, said Conservative group leader Cllr Alex Walker.

He added: "We all have an ambitious vision for the future of MK. But I fear the current council are only focused on delivering arbitrary housing numbers rather than thinking through what our economy needs and whether our infrastructure can withstand the pressures.

"Doubling our population will mean Milton Keynes will change forever. It will be unrecognisable and all the things we love such as the fast grid roads and green spaces would have been eroded away.

"If Labour and the Lib Dems believe this is the right thing to do, then they need to get buy-in from our current population. They need to take residents with them. Doing a borough-wide survey is essential."

Mark Lancaster, who represents Milton Keynes North, said: "Doubling the population within our borders at this rate would just be wrong. It would inevitably risk even more unplanned developments similar to those that have already put incredible pressure on villages such as Hanslope.

"We need to start looking at our growth in the context of the East-West Corridor. We must not drift away from the mantra ‘Infrastructure before Expansion’ on which Milton Keynes was founded, and there must be more focus on regeneration of the areas that risk being left behind."