YOU ARE AT: Business MK > News > Ex-Williams F1 chief takes over at Millbrook 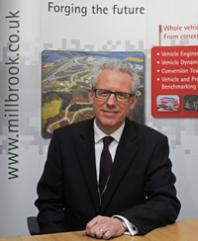 Alex Burns spent 14 years at Williams, 11 as chief operating officer before becoming chief executive.
He replaces Miguel Fragoso, who left Millbrook at the end of January to pursue other interests after almost five years at the helm. During his tenure Millbrook has diversified its business portfolio and was sold late last year to investment company Rutland Partners late last year.
At Williams, Mr Burns established Williams Advanced Engineering, which brought F1-inspired low carbon technology to the commercial and passenger vehicle markets, and led the design and manufacture of five hybrid supercar prototypes.
Prior to Williams, Alex spent 12 years in various senior roles at engineering giant Meggitt plc, having begun his career at Westland Helicopters.
Millbrook chairman John Notmak-Watt said: “Alex’s appointment is a significant step forward in creating a new Millbrook for the future.
"Alex brings with him 30 years of experience in high performance engineering in the UK, together with the energy and enthusiasm to take Millbrook forward.”
Mr Burns, a mechanical engineer who holds a MBA from Cranfield University, said: “I am delighted to be joining Millbrook at such an interesting time. The recent change of ownership represents a great opportunity to develop Millbrook as a world class technology and test centre.”