YOU ARE AT: Business MK > News > Enjoy a terribly splendid Noel Coward evening 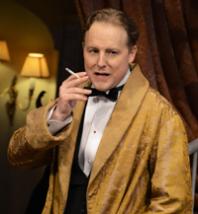 THE DEBATE has raged as to whether Present Laughter is semi-autobiographical but Noel Coward himself said that he wrote the play with the objective of creating a role tailored perfectly for his own clipped wit and devastating put-downs rather than reflecting his life.

The character is Garry Essendine, a leading actor with a massive ego and charm but who is advancing – as his acerbic secretary Monica Reed, played with down-to-earth aplomb by Phyllis Logan, opines – “with every sign of reluctance into middle age”.

Essendine, played splendidly by the excellent Samuel West (pictured), is determined to disregard his advancing years and receding hairline by revelling in endless tantrums and casual affairs.

He is preparing to depart for Africa and a theatre tour. But he finds himself besieged by would-be seductresses, not to mention his long-suffering secretary, his estranged wife Liz and obsessed young playwright Henry Lippiatt.

The play takes a while to develop the characters fully – many are complex to say the least, as we discover more of their secret and not-so-secret past.

But, as Essendine attempts to divest himself of the entourage which he in turn despises and adores depending on his diva mood, the humour escalates, accompanied by the dialogue you would expect from Noel Coward and some sparkling repartee.

Coward experts say that the play marks a turning point in the playwright’s career as he begins to develop more earthy characters rather than reveling in the idle nouveaux riches of his earlier comedies. Certainly the humour is more traditional and there is clear melancholy from Essendine as he passes the 40 barrier.

It is refreshing to see what I would call a ‘proper play’ at Milton Keynes Theatre. We tend to be drawn by the ‘big name’ high profile musicals but the Monday night audience – a sizeable one at that – clearly enjoyed and appreciated the quality of the acting, script and staging.

See it if you can. It is worth it.