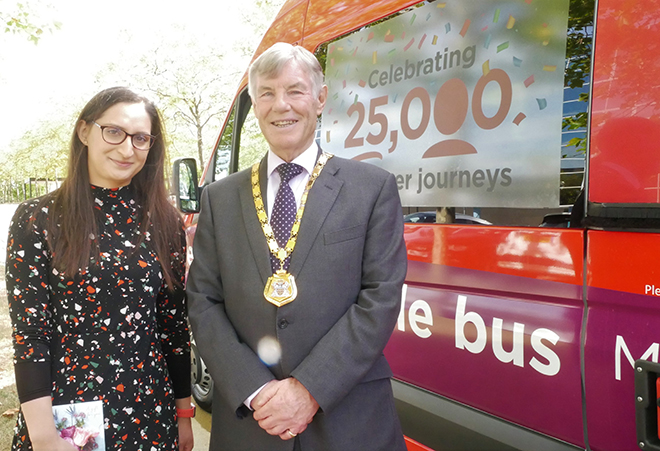 Fatima Baig, who made the 25,000th journey aboard the MyBus shuttle service, is pictured with Milton Keynes Mayor Cllr Sam Crooks.

FOR Network rail employee Fatima Baig, it was to be just another trip aboard the free shuttle service MyBus. But her journey turned into a landmark celebration.

And they welcomed her aboard as she began the service’s 25,000thjourney.

“I am a frequent flier of the My Bus service and it is a fantastic scheme,” said Fatima. “I love the MyMiltonKeynes app which shows me exactly where both the buses are with not more than a few minutes’ wait at the bus stop. I take both the clockwise and counter-clockwise routes, be it for travel between home and work or to the shops at lunchtime.

“ I have been very impressed with and made good use of the rewards on the app.”

She is one of 6,500 employees in central Milton Keynes who use the free service. MyBus is part of the innovative MyMiltonKeynes app, which has been shortlisted for a National Transport Award. The shuttle service operates two circular routes around the city centre, wth 21 MyBus stops.

MP Mark Lancaster, who represents Milton Keynes North, said: “While many other towns and cities have park and ride or similar schemes, the distinct design of the city meant that this sort of system would be expensive and complex to run in Milton Keynes.

“ The circular hop on, hop off My Bus service enables employees to quickly and easily get to and from work and enables them to make the most of the fantastic shopping and leisure facilities during lunch breaks.

“I would like to congratulate MyMiltonKeynes for listening to the thousands of employees in the city and for providing a reliable service that has become a real asset in such a short space of time.”

Mayor Sam Crooks added: “Once again Milton Keynes has broken the mould, launching a unique bus service that perfectly matches the needs of businesses and employees.”