YOU ARE AT: Business MK > News > Education and skills development take centre stage at MKBAA 2019 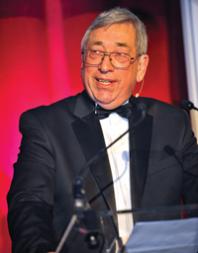 The importance of being competitive on the global stage has never been greater and the challenge – and those businesses that are rising to it – is the theme of the sixth Milton Keynes Business Achievement Awards.
The 2019 competition was launched last night (Thursday) and will focus on the need for businesses to invest in training and upskilling their staff.
The winners will be announced at a gala ceremony held for the first time at Arena MK on March 14.
Guests at the launch event, hosted by Milton Keynes College in its Business and Leadership Centre at the Silbury campus, included leading businesses, supporters, sponsors and previous winners.
The event is organised by Milton Keynes Business Leaders Partnership in association with full service marketing agency Interdirect and event management specialists Evolution Live.
A total 14 awards will be presented, including those in four new categories:
The launch heard from 2018 winners Aero Tec Laboratories, which won the Innovation & Technology award and was named overall Business of the Year. Chief operating officer Cheryl Brimson said winning the award had created new opportunities helped it to improve its performance and, crucially, had been a boost to the company’s recruitment success.
“It is so much easier,” she said. “People are coming to us.”
Urging businesses to enter the awards, Entrepreneur of the Year Theresa Pope, co-founder of Dandi Patch, an ultra-thin patch that solves the problem of underarm sweat patches, added: “The award has elevated our status locally, has helped with our national PR and increased our credibility.
"Winning an award increases consumer confidence and people will take you more seriously.”
The MKBAA 2019 takes place just two weeks before the UK formally leaves the European Union under the terms of exit agreed in Article 50.
Dr Philip Smith, chair of awards organisers Milton Keynes Business Leaders Partnership, said: “This is an incredible moment in all our lives. For business the focus must be even more on growth through trade with countries from around the world. To trade well means we need to trade competitively which in turn means businesses need to invest more in the training of their people.”
The 2019 ceremony will be compered by Sky sports broadcaster Faye Carruthers. Guest speaker will be the Open University’s chancellor Baroness Martha Lane-Fox.
The 2018 competition attracted more than 15 entries across the categories. Mr Smith said: “As always, the awards is all about entries; entries, entries, entries. We are only a success if we get the entries.”
The OU, which celebrates its 50th anniversary next year, is once again among the headline sponsors of the event, alongside Milton Keynes Council and business advisers KPMG.
MKBAA has also presented a £7,500 cheque to Milton Keynes Community Foundation from the proceeds of the 2018 awards. The money will be added to the trust fund established by MKBLP and the Community Foundation which assists start-up businesses in deprived areas of the city.
MKCF chief executive Ian Revill said: “It makes a big difference. The awards is a wonderful event and I would urge any business to enter what is a celebration of business in Milton Keynes.”
For more details and to enter MKBAA 2019, visit www.mkbaa.co.uk