YOU ARE AT: Business MK > News > Economy has faced a challenging year, says new report 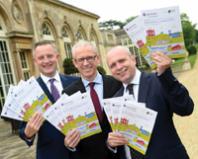 The Bedfordshire Limited study is conducted by business advisers Grant Thornton and analyses the performance of the 100 largest privately owned companies in the county to provide a recognised barometer of the overall health of the local economy.

The report also includes a Growth Index which looks at the 25 companies with the highest profit growth and, for the first time this year, a ‘ones to watch’ section highlighting the fast growing businesses just below the top 100 threshold.

The study findings, unveiled to more than 70 of the county’s business leaders at a breakfast event hosted by Grant Thornton, revealed the combined turnover of the top 100 companies increased by a healthy 3.5% to £3.9 billion.

However, this was offset by a significant fall in Earnings before interest, tax, depreciation and amortisation (EBITDA) of 23%.

In a similar mixed picture, there has been a strengthening of current assets by 4% and a 3.9% fall in total debt but cash balances fell by 6.9%. However, employment remains strong in the county with an increase of 13.3% to 24,915 people.

Steve White, from Grant Thornton’s Milton Keynes office, who presented the findings said: “This year’s report paints a mixed portrait of the Bedfordshire economy. While turnover and employment have remained strong for another consecutive year, we have seen a significant fall in profitability.

“However, it is important to note that the decrease in EBITDA is partly skewed by significant events at certain companies in the top 100 and when you look at the results overall the majority – 66 out of the top 100 businesses – saw a rise in EBITDA.

“Interestingly, our report highlights that SMEs achieved a higher rate of turnover growth (4.7%) compared to large corporates (2.6%) although they were not immune to the fall in EBITDA with a decrease of 14.8%.

“Positively, employment growth has remained strong and there is still no sign of a tightening employment market feeding through into wage inflation. Indeed, for the first time average remuneration has dropped.”

The Bedfordshire Limited report also analyses the performance of the top 100 companies by sector.

Seven of the nine sectors increased turnover with four reporting an increase in EBITDA. The stand-out sectors were business support services, which had the biggest growth in turnover at 18.1%, and the technology sector, which bucked the trend with a 63.8% increase in profitability.

However, freight, logistics and aviation companies had a challenging year with a 66.4% fall in EBITDA, principally driven by a significant downturn in the performance of Monarch Airlines, although turnover and employment were both up at 2.9% and 8.3% respectively.

Similarly, the healthcare and education saw a 69.7% decrease in EBITDA, having felt the impact of changes to public sector funding and the increase to the National Minimum Wage.

Mr White said: “While it is encouraging that the majority of sectors saw an increase in turnover and employment, several have faced a difficult year with a number of pressures impacting the bottom line, particularly healthcare and education and freight, logistics and aviation.

“However, both these sectors have invested in more staff through recruitment and in existing staff through increased wages. With a continued skills shortage highlighted across Bedfordshire, this investment will be vital in turning around their growth prospects for the year ahead.”

The report was produced in association with Bedfordshire Chamber of Commerce. Chairman Rod Calvert said: “Even against a back drop of uncertain times, Bedfordshire has never been better placed to overcome the potential challenges that lay ahead.

“Ambition, innovation and entrepreneurial spirit can be seen in shining examples throughout the county. From the expansion at London Luton Airport, world leading innovation at Hybrid Air Vehicles, Lockheed Martin and Millbrook Proving Ground, to Bedfordshire seeing six companies achieving the Queens Award for Enterprise demonstrates the determination of businesses within Bedfordshire to strive to be the very best they can be.”

The Chamber has helped businesses to export more than £116 million of goods outside the EU, helped smaller firms to access £269,000 of grants that have brought forward almost £1.7 million of investment.

Mr Calvert said: “We believe with the right advice, funding and local support, every business can achieve their aspirations of growth.”