YOU ARE AT: Business MK > News > easyJet downgrades profit forecast after volcano eruption 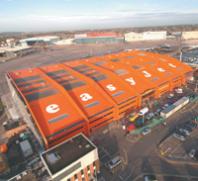 The airline has downgraded its pre-tax profit forecast for 2010 by 25% at current exchange rates and fuel prices as a result of the disruption. Nevertheless, the airline expects to deliver strong profit growth this year after reporting pre-tax losses of more than £78 million for 2009.
Passenger numbers are also expected to increase by a tenth, said the airline’s chief executive Andy Harrison.
He added: “easyJet will deliver substantial profit growth in 2010 through the worst recession in 70 years and even after absorbing snow and volcanic ash related disruption costs from the worst snowfall in 30 years and an unprecedented five day closure of much of European airspace.
“We expect to grow our passenger numbers by around 10% and increase both yield and load factor. This is a remarkable performance based on strong European-wide consumer demand for our low cost network of primary routes which offers the lowest prices to the most convenient airports.”
Before the volcano eruption in Iceland and the severe winter that closed many airports throughout Europe, easyJet had estimated full year pre-tax profit in the range of £175 million to £200 million. Now the airline has revised its forecast downwards.
Despite its pre-tax loss last year, easyJet has reported revenue per seat increasing by just over 5%. The airline also increased its European market share from 6.5% to 7.6%.