YOU ARE AT: Business MK > > News > easyJet announces profits leap 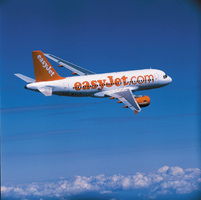 The news comes as the airline announced a 56 pc increase in year-on-year profit before tax, that it had ordered a further 52 Airbus A319 aircraft and secured options on another 75.

An easyJet spokeswoman at the companyâ€™s headquarters at London Luton Airport said: “We have not yet decided where the new aircraft will be based but clearly there is considerable potential growth for Luton. We have launched several new routes from London Luton this year and are moving to new offices at the airport, which only serves to underline our commitement to the airport and the area.”

EasyJet currently operates 122 aircraft with an average age of just over two years, flying 262 routes between 74 airports in 21 countries.

Mr Harrison welcomed the Stern review into climate change and said: “Our Airbus order supports both our growth and our environmental credentials. The combination of our modern fleet and high utilisation means that we emit nearly 30pc fewer emissions per passenger kilometre than traditional airlines flying similar routes.

“We believe the best way forward is to bring aviation into the European Emissions Trading System as soon as possible.”

He said that the airline expected another fiercely competitive summer but the easyJet board remained confident that the business would continue to progress.

Mr Harrison added: “The Airbus order underpins our future growth. We remain focused on improving execution and delivery of results by revenue enhancement, network development and cost reduction. This year has seen an encouraging step towards improved return on equity. “