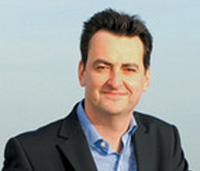 A budget of £2 million has been earmarked to allow the consortium, through MKP, to develop an outline design of the rail infrastructure and detailed construction and operations management plans.

Chiltern Railways has agreed to rebuild the Oxford to Bicester section of the line for their new service, and will engineer it to also accommodate the East-West route services.

The line between Bicester and Bletchley will all be on the existing railway (which is still legally operational) and, therefore, should be covered by the normal planning permission process. Work to reopen it will be overseen by MKP, while Chiltern Railways will supervise the development west of Bicester Town station.

MKP chief executive John Lewis (pictured) said: “This arrangement means that we can avoid any duplication of work and it will also significantly reduce overall costs for the East-West Rail project.”

Allan Dare, strategic development manager of Chiltern Railways, said: “The two schemes complement each other very well,and by working together we can ensure the best possible services at a lower cost.”

The Chiltern Railways’ route will need a new chord line at Bicester to connect its London to Birmingham line with the East-West route just east of Bicester Town station; upgrading and double-tracking the East-West line from Bicester Town to Oxford; and a new station at Water Eaton Parkway.