YOU ARE AT: Business MK > News > Dream comes true as stadium is chosen to host Rugby World Cup matches 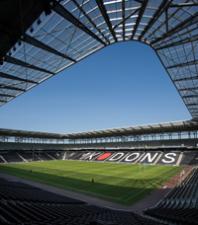 The tournament is expected to bring around 100,000 people to the city to watch the matches, which will include a game involving leading rugby nation France and will take place in early October 2015.
Work will continue to bring stadiummk up to its capacity of just under 31,000 ahead of the tournament.
The successful bid was put together by a group including MK Dons FC, Northampton Saints Rugby Club, Milton Keynes Council and other partners.
MK Dons chairman Pete Winkelman said: “stadiummk was always designed to accommodate top-class sport at the highest international level and it was always our dream for Milton Keynes to be at the heart of such a major world event.
“I am thrilled the stadium, the city and the people of Milton Keynes can now be associated with what is hopefully going to be a memorable year for England rugby.
“Milton Keynes has once again shown its ability to come together and set such bold ambitions. It is a huge achievement by all of the Milton Keynes stakeholders. The aim now is to engage with the community, put on a fantastic show and inspire a whole new generation.”
Milton Keynes Council leader Cllr Andrew Geary said: “What a great achievement for Milton Keynes. It’s fantastic that England Rugby has endorsed Milton Keynes as worthy of hosting the Rugby World Cup.
"It’s a major international sporting event, which well and truly places Milton Keynes on the international sporting map.
"It will bring a major boost to the local economy and help us to connect grassroots rugby with the elite game, an important part of our goal to become an international sporting city.”
Milton keynes has been chosen alongside leading rugby venues including Twickenham, Wembley Stadium, the Millenium Stadium in Cardiff and the Olympic Stadium in East London.
Other host stadia include the Etihad Stadium in Manchester, St James’ Park in Newcastle, Elland Road, home of Leeds Utd FC, Villa Park in Birmingham and the rugby grounds of Gloucester and Exeter.