YOU ARE AT: Business MK > News > Dragons take to the water

Dragons take to the water 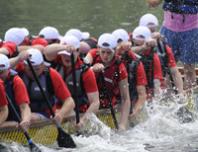 Sponsored by Easycopiers and held at Willen Lake at the weekend, the eighth festival  attracted 60 crews – more than 1,250 competitors – and an estimated 12,000 spectators for a fantastic day’s racing in glorious sunshine.
The crews, representing businesses, organisations and groups of friends from all over Milton Keynes and the surrounding area battled it out all day in five-boat races over a 250-metre race course.
Wheldon 5 0 won a closely fought final over Chicken Balls 09 (Admiral Business Systems). Also in the final were teams from Argos Finance, business advisers KPMG and HM Prison Woodhill.
The Newport Pagnell company also won the mixed crew competition. The crew representing thecentre:mk won the Charity Trophy, pledging £2,500 for the festival’s nominated charity World Vision.
Merklyn Hauck, of organisers Gable Events, said: “We were delighted to again attract the maximum entry of 60 teams and the beautiful weather brought a large number of spectators down to Willen Lake to join in the fun.”
Samantha Dalrymple, regional sales director of main sponsor Easycopiers, said: “It was wonderful to see so many local companies and families enjoying themselves at Willen Lake, watching the racing and taking part in the riverside activities. The enthusiasm and camaraderie shown by all of the crews was superb.
“It was a pleasure to be involved in the biggest corporate team event in Milton Keynes and we are sure that our nominated charity World Vision will be delighted with the money that has been raised.”