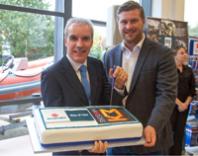 The motor giant is the club’s official sponsor for the next two seasons and  Suzuki GB plc welcomed the squad for a tour and a meet the staff event at its head offices at Snelshall West.

Suzuki staff chatted with the players, the manager and executive director Andrew Cullen. The players posed for photos and signed autographs before the management took part in a Q&A session.

The squad were also given a tour of the headquarters for Suzuki Cars, Motorcycles, All Terrain Vehicles and Marine engines as well as the extensive supply of parts to its dealer networks.

Pete Smith, general manager, human resources and corporate operations, said: “It was a pleasure to welcome the MK Dons to our offices. We certainly enjoyed giving them the opportunity to experience what we all do here on a daily basis, particularly when Suzuki are  making such strong progress in the UK.

“Our relationship with the club will really help further improve the awareness of Suzuki in the local community and it is great involvement for our 145 staff too with a high proportion of them living locally.”

The major sponsorship deal sees the world-famous Suzuki logo carried on the Dons’ first team and replica shirts and training kit throughout the 2014-15 and 2015-16 seasons.

Suzuki is also involved in a community project with local schools through the club’s Sports and Education Trust.