YOU ARE AT: Business MK > > News > Directors toast launch of new IoD branch 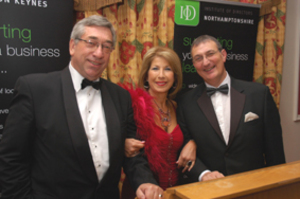 The evening marked the official launch of the IoDâ€™s new Milton Keynes branch. Speaking at the dinner, IoD national chairman Dr Neville Bain voiced his support for the new branch, which had emerged following the reorganisation of the former South East Midlands IoD.

Dr Bain told his audience that the IoD had had another good year, spearheaded by the development of its Chartered Director qualification which had now reached critical mass, he said.

Former BBC reporter Jennie Bond was the main speaker and entertained her audience with reminiscences of her appearance on the ITV reality show â€˜Iâ€™m A Celebrity, get Me Out Of Hereâ€™ and gave a revealing insight into her relationships and reminiscences of her time as the BBCâ€™s Royal reporter. A raffle in aid of The Princeâ€™s Trust raised more than Â£1,100.

Milton Keynes branch chairman Philip Smith said: “It was an encouraging evening for Milton Keynes business, who turned out in force. The importance of the dinner was clearly shown by the presence of IoDâ€™s national chairman. It was a pleasant and enjoyable occasion with plenty of opportunity to network.”