YOU ARE AT: Business MK > Growth Debate > Design work on rail link begins 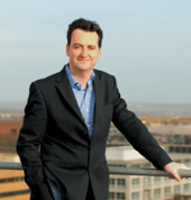 Milton Keynes Partnership and the East-West Rail Consortium have commissioned work to complete the design, a project that will include a fully developed operating and business case.

That is expected to be completed by December 2009.

Atkins Consultancy has been awarded the contract to provide a fully-costed outline design of the civil and railway engineering infrastructure needed to run trains between Oxford and Milton Keynes and Aylesbury to Milton Keynes.

A further review of existing train services between Bletchley and Bedford is also anticipated in order to improve connections to Bedford.

MKP chief executive John Lewis (pictured) said: “Over the next 12 months we are aiming to develop a robust funding strategy in co-operation with local planning and transport authorities, the South East England Regional Assembly and SEEDA to secure a significant proportion of the cost of the capital scheme through private sector contributions.

“We also want to develop this scheme by working in collaboration with the rail industry and our recently signed agreement with Chiltern Railways is a good example of this.”

Consultation with key stakeholders will be an important part of the next phase particularly with regard to station locations, station improvements and the potential impact of the two proposed eco-towns in Marston Vale, between Bedford and Milton Keynes, and either Weston Otmoor or North West Bicester in Oxfordshire.

The first phase of the programme should be completed by April 2009 at which point a review will be conducted with DfT Rail and Network Rail so that an agreement can be reached on a single option to take forward to GRIP Stage 4.