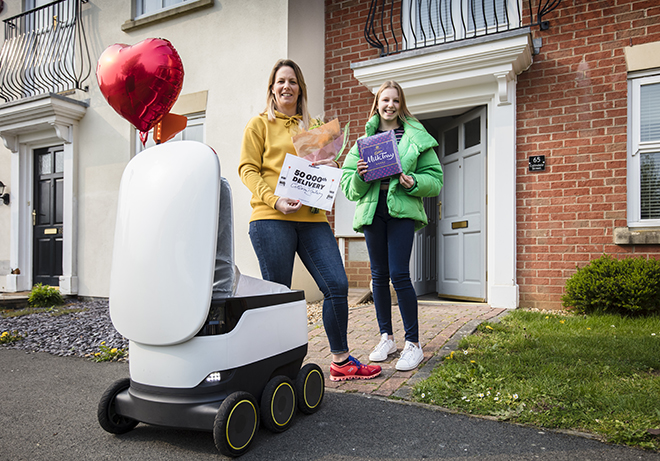 THE COMPANY behind the autonomous delivery vehicles on the streets of Milton Keynes is celebrating a significant milestone.

Starship Technologies has delivered its 50,000th order  and is also marking its first anniversary of operation in the city.

Its robots began delivering groceries and items from a Co-op food store in Milton Keynes to residents’ front doors in April last year. Since then, the number of houses served in the city has grown by 450 per cent. Starship has also announced a new partnership with a second Co-op store in Milton Keynes, adding to the delivery service from the Tesco store at Kingston.

The most popular items ordered in the last year include milk, bread and chocolate. Starship says the service not only saves time and provides convenience for residents but also reduces congestion and pollution.

Starship Technologies chief executive Lex Bayer said: “It has been exciting to see the increase in ‘top up shopping’ by residents in Milton Keynes where they buy groceries on multiple occasions throughout the week now that they have the option of autonomous delivery.”

Gillian Bailey, who received the 50,000th delivery made by Starship in Milton Keynes, has made more than 100 orders since the service began. “Since the robots came to our neighbourhood last year, they have become such a popular and common sight,” she says. “With my hectic schedule, it is really convenient to get my groceries delivered by the robot right to my front door while I am busy with other things around the house. Our community feels really lucky to have this service available in our area.”

Starship is also expanding in the USA. It has brought its autonomous delivery services to Northern Arizona University after first launching at George Mason University campus in Virginia in January.

Mr Bayer said: “The popularity of our service continues and we are delighted to be expanding to additional neighbourhoods and university campuses across the world.