YOU ARE AT: Business MK > News > Day nursery provider is named a European Business Champion 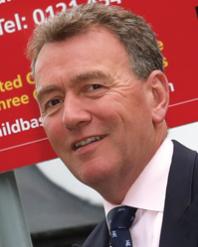 Chosen from over 33,000 organisations in 34 countries, the Newport Pagnell-based company is shortlisted for a European Business of the Year Award.

Founder and chief executive Mike Thompson (pictured) said: “We are very proud to be representing our country as a National Champion particularly because it has been a challenging year for UK businesses generally and our sector in particular.”

An independent judging panel selected Childbase Partnership as a National Champion because most of its day nurseries, which care for over 6,000 children aged between six weeks to five years, are Ofsted-rated ‘Outstanding’ which is achieved by only 15% of UK providers.

Mr Thompson said: “This accolade recognises the efforts of all my Childbase partners who pursue excellence every single day, in everything they do, to ensure the children in our care get the very best start in life.”

Childbase Partnership, the tenth largest employee-owned organisation in the UK, has 44 day nurseries throughout the South of England.

The ultimate winners in the competition to find the best businesses, in categories based on size and turnover, will be announced at a ceremony in held in Milan next year and attended by heads of state, leading industrialists, and business leaders from 34 European nations.