YOU ARE AT: Business MK > News > Cyclists prepare for charity marathon 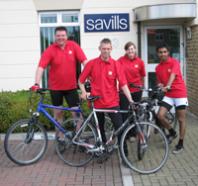 Pictured are Ivor Lafford, Kelly Rix, Indy Shokar and Ian Simpson – all from property consultants Savills in Milton Keynes – who with friends Nicholas and Jennifer Walley will join thousands of other cyclists on June 21 for the 54-mile ride.
The London to Brighton is the largest cycle event in Europe and the 2009 Ride is already full. Last year it raised £4.2 million to help the BHF continue its life-saving work.
Indy Shokar said: “I did it last year so I know what’s in store. I just thought it would be a great opportunity to do something together for such a worthwhile cause and get fit at the same time.”
Some of the team starting training just recently but Ivor has been out with Nick and Jenny since January, even in the frost and ice, between them clocking up more than 1,800 miles so far, while Ian took part in a charity cycle ride in South America a few months ago.
The team is hoping to raise at least £1.000 between them. To sponsor them online, go to www.justgiving.co.uk/lafford