YOU ARE AT: Business MK > News > Cyclists go the Extra Mile for charity 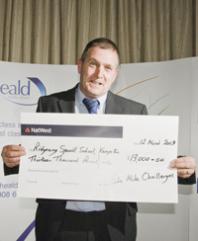 Guests at the annual reception and cheque presentation ceremony heard Extra Mile Challenges charitable trust treat=surer Preston Ayres announce the landmark achievement.
The 42 teams who took part in last September’s Heald Solicitors Extra Mile Massif Challenge through France have spent the past six months collecting sponsorship pledges which have reached a grand total of £111,100.
Cllr Jan Lloyd, Mayor of Milton Keynes, Bedford MP Patrick Hall and Cllr Anita Gerrard of Bedford Borough Council attended the reception to congratulate the teams and present a cheque for £13,000 to each of the three primary charities, selected by the event’s organisers.
The three charities, which receive between them one-third of the overall funds raised, were Milton Keynes YMCA, Ridgeway Special School in Kempston and ARCA, a Brazilian street children’s charity. The other two-thirds of the funds raised will be divided between the teams’ nominated charities.
Ridgeway head Graham Allard (pictured) said the money would go towards a minibus for the school. He told guests at the reception: “Your achievement is amazing. I thank you from the bottom of my heart and I know that the same goes for the other charities you are supporting. This money is going to change lives.”
Other donations included: volunteers from the Rotary Clubs in Bedford and Milton Keynes who stewarded and coordinated the ride; cycling accessories from Trek Bikes of Milton Keynes; promotional literature printed by Gibbs and Dandy of Bedford; discounts for Extra Mile participants from Corley Cycles of Milton Keynes; and PR and marketing from Solution Factors in Woburn Sands.
The Extra Mile Challenge, organised by Heald Solicitors, attracted a total 170 cyclists. Heald senior partner Martin Banham-Hall said: “We would also like to thank the businesses who sponsored the individual teams.”