YOU ARE AT: Business MK > News > Coupe and Corden aim to launch a film maker’s career

Coupe and Corden aim to launch a film maker’s career 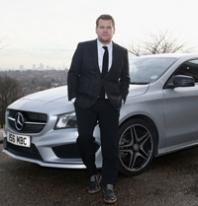 The company, whose UK headquarters are in Milton Keynes, aims to help the best and brightest creative minds thrive as it launches #CLAstory – a programme aimed at supporting fledgling filmmakers and will lead to the commissioning of an online film starring actor and writer James Corden.

The initiative is a vital first step for budding talent and forms part of an exciting new social media campaign launching on the microsite www.clastory.co.uk

At the heart of the project is the four-door coupe Mercedes-Benz CLA.

Their instavids provide a basic framework for the story – forming the beginning, middle and end of a storyboard – six vital scenes from which are missing.

Budding film directors will be invited to complete the scenes and the film in the #CLAstory by uploading their videos to the Mercedes-Benz UK Instagram channel mercedesbenzUK.

Mercedes-Benz Cars communications and events director Rob Halloway  said: “#CLAstory is an initiative which gives others the chance to tell their story and present the Mercedes-Benz brand in a way that is credible, relevant and appealing to them.

"It means we can pair an as yet unknown but talented director with one of the country’s most well-known actors – and one of our coolest cars.”

#CLAstory is aimed at the Mercedes-Benz online community, creative influencers, film enthusiasts and film students. Anyone with the creative spark and ingenuity to create something special – a short film that engages, that excites and inspires others to give it a go.