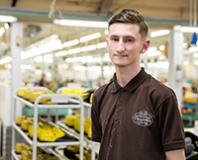 New figures released ahead of National Apprenticeship Week have revealed that employer advertisements for apprentices are down by 40%.

Across Northamptonshire, however, they are up by 15%.

“This is hugely exciting given our county is made up of 98% small to medium-sized businesses,” Ms Exelby said. “Many colleges did not secure any of this non-levy pot but we are working to be commercially savvy and this has really paid off.”

Student Kyle Auburn pictured is in the second year of a two-year NVQ in footwear manufacturing and is enjoying an apprenticeship with Northampton shoemakers Church’s.

He said: “Starting the apprenticeship has proved to be a great move. It has allowed me to earn a bit of money and do the things I would not have been able to afford to do if I had have gone down the university route.

“Rather than being in a mountain of debt I have been able to buy a car and learn to drive while getting a real taste of the world of work.

“Being at Church’s has given me an incredible insight into the shoe trade,  the industry that Northampton is known for around the world. I have had the chance to work my way around all the different departments in the company and I am learning something new every day.

“It has been brilliant for me.”

The 11th National Apprenticeship Week begins tomorrow (Monday), giving employers and apprentices from across the country the opportunity to celebrate the success of apprenticeships and encouraging young people to choose apprenticeships as a pathway to a future career.

Among the most popular apprenticeships at Northampton College are business administration, electrical installations and maintenance and engineering.

From September, the college will also offer a host of construction apprenticeships and is seeking any businesses that would be interested in workplace learning.