YOU ARE AT: Business MK > News > Councils join forces to promote growth corridor 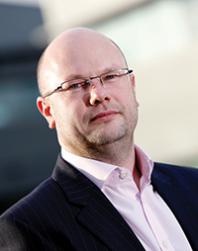 The Central Corridor Group’s focus is in response to the National Infrastructure Commission’s programme to scope the economic opportunity of the area.

CCG chairman Jason Longhurst pictured, director of regeneration and business at Central Bedfordshire Council, said: “The Growth Corridor is already one of the most innovative and economically successful areas of the UK but its enormous growth potential is recognised by government as a once-in-a-generation opportunity to become a knowledge-intensive cluster, competing globally.”

“Now is the time to join forces and promote these strengths, in a drive to unlock this potential for the UK.”

The number of businesses in the area grew by 17% last year. They will benefit from further planned investment, with nationally significant infrastructure projects that will build on the area’s connectivity including London Luton Airport’s £110 million transformation and the East West Rail Link between Oxford and Cambridge, complemented by the proposed ‘Expressway’ road.

Mr Longhurst said: “The civic leadership of the Central Area shares an ambition for delivering innovation and sustainable economic and housing growth.

"Partners are delivering on the range of planned developments around the area and seeking new innovations for enabling growth and investment.”