YOU ARE AT: Business MK > News > Councillor praises success of Career WorkOut sessions 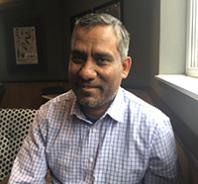 Eight have taken part in the one-hour sessions at schools around the city. The aim is to encourage pupils to broaden their ideas about different jobs and develop the vital employability skill of speaking and listening by asking questions about work to a range of different work guests.
Each session sees up to ten volunteers from the world of work each take questions from groups of up to four students in a carousel of six-minute conversations about their experiences of work.
Cllr Mohammed Khan, who represents the Bletchley East ward, is pictured at a Career WorkOut at Sir Herbert Leon Academy, where he was a pupil.
“I enjoyed the company of the young people,” he said. “They were engaged in listening and seemed really interested in what I do.”
Around 4,000 students aged 11-18 have taken part in just over 100 Career WorkOut sessions this academic year in ten secondary schools. They have heard from a total 582 volunteers from 164 companies and organisations based in Milton Keynes.
Cllr Khan said: “If we do not set up as role models for community integration, who will? Our city is growing fast.  There are already 180,000 jobs. We want our young people to get these jobs.”
The council stands sixth in Worktree’s corporate volunteering league table, which is currently led by Network Rail. Five councillors have pledged or already delivered a financial contribution to Worktree from their annual councillor’s grant allowance.
Worktree consultant Tom Bulman said: “Worktree is very grateful for these time and money contributions. We understand the pressures that councillors and council staff are under.
"It is really good for the young people that they see how volunteering a bit of time helps workers to maintain a balanced work life.”