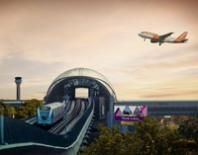 The news was a highlight at the launch of Luton’s ambitious and wide-ranging £1.5 billion inward investment programme which outlines a 20-year plan for major transformation of the town and signals how the borough will achieve strong, sustainable and balanced growth and create jobs for local people.

Construction is already well under way on the airport’s separate £110 million redevelopment plans, and together the combined investment will transform the passenger experience and enable LLA to increase its capacity by 50% to 18 million passengers per year by 2020.
The MPT system will be a fully-automated, two-way, 24-hour, guided light rail people mover based on latest system technology and design innovation, and when complete will enable a quickest direct journey time between London St Pancras and the airport terminal of under 30 minutes.
The airport board has appointed Arup to design and procure the scheme, and it is anticipated that a planning application will be made in the early autumn. Work could begin in 2017 with the system ready for operation by the end of 2020.
Making the announcement at the St Pancras Renaissance Hotel in London, London Luton Airport chairman Cllr Andy Malcolm said: “I am delighted to confirm that the board has committed to start the procurement process to provide fast, easy access between Luton Airport Parkway and the airport terminal.
“Luton is the fastest growing airport in the UK and enjoys excellent road links to London and the North while Luton Airport Parkway also gives excellent rail connectivity to the capital and the Midlands.”
The identified preferred 2.2km route runs between two purpose-built stations, heading out from Stirling Place where a new commercial development and multi-storey car park is also planned, alongside the mainline railway and crossing over Airport Way before passing through the airport’s existing mid-term car park and arriving at the airport’s central terminal area.
It is envisaged that fares would be included under train ticket or car parking arrangements, or available for separate purchase, as with the current bus service.
The growth of London Luton Airport is predicted to increase its economic impact by 77% from £1.3 billion to £2.3 billion by 2030 and create 10,500 new jobs over the next 15 years.
In its latest budget the government confirmed that Enterprise Zone status had been granted to three linked sites surrounding the airport, at Stirling Place, Century Park and the Airport Business Park.
Cllr Malcolm added: “LLAL is committed not only to optimising the airport’s capacity to 18 million passengers per year but also to the development of the town as a whole.
“With a  catchment area of 23 million people within a two-hour travel time, London Luton Airport is ready and willing to make a significant contribution to meeting the growing demand for air travel in London and the South-East.
“Combined with the prospect of four fast trains an hour which we are lobbying for, this investment in mass passenger transit will transform the experience of those travelling to the airport by rail and will encourage more people to do so and therefore help to reduce congestion on the roads.
“It also has the potential to open up opportunities for development throughout the Enterprise Zone and signals our belief in its potential for economic and employment growth.”
Airport chief ecxecutive Nick Barton said: “Improving rail links is a crucial part of LLA’s development, and integral to ensure that we provide the best possible service for all our passengers.
“The creation of a mass passenger transmit link between Parkway station and the terminal is a milestone in the airport’s transformation and the first step towards creating a world-class air-rail service.”
Neil Slaven, commercial manager of budget airline easyJet – whose headquarters are at the airport, said: “easyJet welcomes the plan for a new direct rail link connecting Luton Airport Parkway train station with the airport. A quicker and easier connection for passengers is a key part of the transformation of the airport and will help to attract more passengers to London Luton Airport.
easyJet flies more than five million passengers a year to and from Luton.

Mr Slaven said: “The redevelopment of the airport was a key factor in our commitment to double our passenger numbers over the next 10 years. We have ambitious plans for growth which will result in an even greater range of business and leisure destinations for our passengers and today’s announcement today is a really positive step towards helping us to realise those ambitions.”
The investment will be funded under LLAL’s capital programme.
Luton Borough Council leader Cllr Hazel Simmons said: “Luton’s Investment Framework underpins how the local authority is working with key partners to drive improvements to prosperity, health and wellbeing across the town.

“Luton is ambitious, innovative and ready for business and we want to demonstrate quality at every level.”