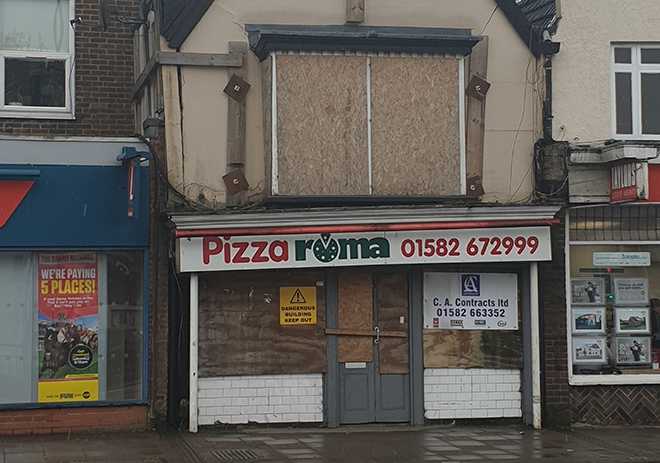 THE OWNER of a listed building that has become a local eyesore has been ordered to renovate it.

Central Bedfordshire Council told the owner of 4, High Street South in Dunstable, which is the site of the former PizzaRoma store, that they must repair the building within months.

The listed building dates back to the 1600s and is in the Dunstable Conservation Area but it has become derelict and dilapidated.

Cllr Kevin Collins, executive member for planning and regeneration, said: “Our officers have tried to persuade the owner to carry out the much-needed repairs but they have failed to do so. The building’s poor condition is affecting it as a historically-important building, as well as impacting on the appearance of the surrounding area.”

The council has served an enforcement notice requiring the owner to carry out an initial 19 improvements, including painting, filling in cracks and repairs to rotten woodwork.

“Our actions will help preserve this important and prominent listed building for the future, and ensure that its visual appearance is not a blight on the neighbourhood,” said Cllr Collins.

Central Bedfordshire Council gave more than £125,000 worth of grants to independent shops and businesses in Dunstable last year as part of its £1 million High Street Improvement Scheme.

“This case shows that we will use formal legal powers when necessary to ensure that the owners of buildings take responsibility for their property and keep them in good condition for the community,” said Cllr Collins.

“We stepped in because it is important that the town is kept presentable to ensure that people to want to visit or live here, and for businesses to want to be located here.”

The owner, based in the West Midlands, has to make some of the repairs within one month with up to four months to do the more major renovations. Failure to comply with the notice is a criminal offence, said a council spokesman.

The owner is based in the West Midlands. It is a criminal offence to fail to comply with the requirements of the notice.