YOU ARE AT: Business MK > News > Council chief takes to international stage at urban forum in China 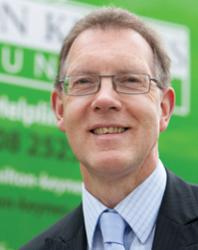 Mr Hill (pictured) took the opportunity to highlight the many selling points that Milton Keynes offers as a UK and European base for international companies. “It was an opportunity too good to miss,” he said.
Milton Keynes has hosted a series of delegations from China of business leaders looking at the city as a potential inward investment location and as a city from which to learn important development lessons.
Mr Hill flew to the Chinese capital Beijing as a guest of the China Central Television Company’s business channel to participate in the forum, staged in the Great Hall of the People.
He spoke to Chinese national, municipal and business leaders at the event, which focused on the benefits and the challenges of urbanisation both in China and through learning from other cities elsewhere in the world.
Mr Hill was joined in the discussion by the deputy mayor of Sandy Springs, Georgia, and the mayors of two major Chinese cities. He used the discussion to highlight Milton Keynes’ many selling points, including those that could provide a useful template for Chinese authorities wishing to promote successful and sustainable growth:
Mr Hill said: “Although it was a whistle-stop tour, we were made very welcome by our hosts who clearly see Milton Keynes for the innovative and potentially ‘world leading’ place it is. I was impressed by the calibre of some of my fellow delegates. There were some real heavyweights there.
“Milton Keynes is already recognised by many in China is being an exemplar new city and we have welcomed a number of visitors from China in recent years. I hope my visit will have boosted Milton Keynes’ reputation in China.”