YOU ARE AT: Business MK > News > Consultation begins on revamp plans for Milton Keynes Bowl 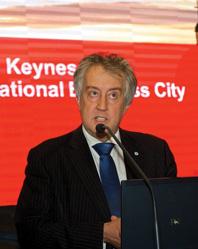 A six-week consultation period has begun on the draft development brief proposed by Milton Keynes Council, which acquired the site from the Homes & Communities Agency in January.
The draft Development Brief outlines five options for the future use of the area, in line with current council policy which requires the site to be developed for sporting and leisure uses.
Planning permission for a new HQ for Badminton England has already been granted on the site of the east car park.
Other options include incorporation of the MK Dons Academy, an international team base facility to serve – for example – the Rugby World Cup in 2015, but also with options for alternative leisure and sporting uses, as well as an option including retaining the Bowl as a concert venue.
The Development Brief requires all five options to include The Badminton project, as well as safeguarding some form of cycling facility on (or off) site. (The existing cycling circuit is protected under existing policy)
Cllr David Hopkins pictured, cabinet member responsible, said: “The National Bowl site is a significant asset for Milton Keynes but at present it is a significantly underused leisure facility.
“The infrastructure at the Bowl is outdated and the site is in need of substantial investment to maximise its potential.”
The council wants to hear from businesses as well as community groups, individuals and other interested parties.
Cllr Hopkins added: “We want to work to turn this site into a major leisure and sporting facility for not just Milton Keynes but also for a wider regional, national and international audience.”
Consultation on the Development Brief will run until August 5.
Comments should be e-mailed to [email protected] or posted to Urban Design and Landscape Architecture PO Milton Keynes Council PO Box 113, Milton Keynes MK9 3EJ.
A copy of the full draft Development Brief can be found at www.milton-keynes.gov.uk/udla
MILTON KEYNES BOWL: THE OPTIONS
Option 1
The Badminton Project, MK Cycling, an international ‘team base’ facility, MK Dons First Team Training and Academy and occasional concerts/events.
Option 2
The Badminton Project, an international ‘team base’ facility, MK Dons First Team and Training Academy and occasional concerts/events.
Option 3
The Badminton Project, MK Cycling and occasional concerts/events.
Option 4
Major concerts and events as well as the Badminton Project.
Option 5
With the exception of the Badminton Project on the east car park which must be included, any proposals within the permissible policy will be allowed.