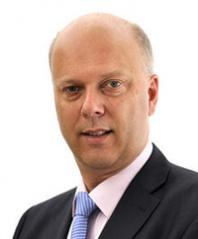 East West Rail is important and exactly the type of project needed to support the UK’s growth plans, the minister told local authority leaders at the County Councils National Conference.

The comments by Mr Grayling (pictured), made just weeks before government sets out its spending priorities in the Autumn Statement, have been welcomed by the East West Rail Consortium of local authorities and local enterprise partnerships along the corridor.

The western section of the East West Rail project aims to reopen the line between Oxford and Bletchley, restoring passenger and freight services.

It is due to open in 2019 and will join up with the operational Bletchley-Bedford line.

Cllr Rodney Rose, chairman of the western section joint delivery board and deputy leader of Oxfordshire County Council said: “Following a period of uncertainty over delays due to pressure on the national rail budget, we are optimistic that government will now follow through on its commitment by making funds available for earliest possible completion.

“We continue to work closely with Department for Transport and Network Rail to make this happen. We look forward to having a clear, realistic and accelerated delivery programme by January 2017.”

East West Rail is one of the top three rail investment projects in the UK, he added. When the consortium handed its costed prospectus to government in 2011, the scheme was forecast to give back £6 for every £1 spent and have recouped its cost within five years of operating.

Once open, the scheme is expected to deliver £200 million a year to the economy.

“It is the top infrastructure priority for England’s Economic Heartland Strategic Alliance, and six local enterprise partnerships in the heartland area. our immediate priority is to see the Western Section completed.

"This will be a major step towards our long-held aspiration and strategic vision to reintroduce a railway between Bedford and Cambridge, connecting with the East Coast Mainline, to radically improve connectivity from East Anglia, to the rest of the country.

"Work by six local enterprise partnerships and the National Infrastructure Commission all shows that East West Rail is absolutely key to unlocking the economic potential of this.”

The service is due to start operating from Oxford city centre by the end of the year.

Cllr Rose said: “It is vital that momentum is maintained and we build on this success to deliver the next phase of East West Rail, from Bicester to Bedford, and Milton Keynes to Aylesbury, so that train services can provide the much-needed connectivity between these key areas of economic activity and population.

"This is the critical next step in re-establishing the key strategic link between Oxford and Cambridge.

“There is overwhelming support from the public, the business community and investors. We need to crack on and get it built so we can realise the opportunities it presents to boost the economy, create new jobs, support housing growth and improve the quality of life of people in the region.”