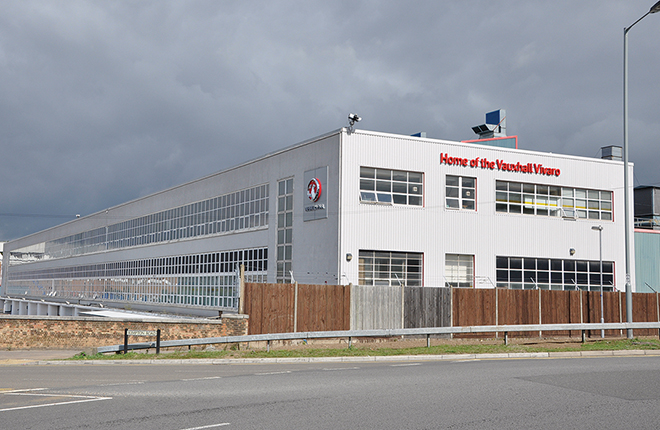 The Vauxhall factory at Luton.

VAUXHALL Motors has officially unveiled its new logo design, a reworking of its iconic griffin emblem.

The logo, along with the new Vauxhall Vizor which will integrate the grille, headlights and brand logo into an exterior single module, will be the brand’s new and progressive face.  Alongside these will be the Pure Panel, which see’s further redesign to the Vauxhall interior through a fully digital high-tech dashboard.

Managing director Stephen Norman said: “The bold yet simple redesigns reinforce Vauxhall’s position as a confidently British brand. Constantly evolving and innovating, the brand continues to reinvent itself, with these most recent updates a reflection of Vauxhall’s commitment to ingenious design and modernisation.

“While retaining its most iconic elements, the contemporary, minimal aesthetic had been created to seamlessly match our forthcoming models.”

The new log represents a move away from the 3-D metallic texture which has been present since 2008 in favour of a flat minimalist design, optimised for the digital age. It features a sleek, stylish new griffin emblem which loses the griffin’s wing and the word ‘Vauxhall’ across the top while retaining the Vauxhall ‘V’.

The logo also pairs the brand’s idiosyncratic bright red colour with a deep blue – underlining Vauxhall’s heritage as a British Brand since 1903.

The new logo presents an updated and exciting fresh face to the world and, with its focus on digital optimisation, places Vauxhall at the very forefront of British roads, Mr Norman added.

Both the redesigned logo and Vizor grille will feature first on the new Vauxhall Mokka, due for release in 2021.