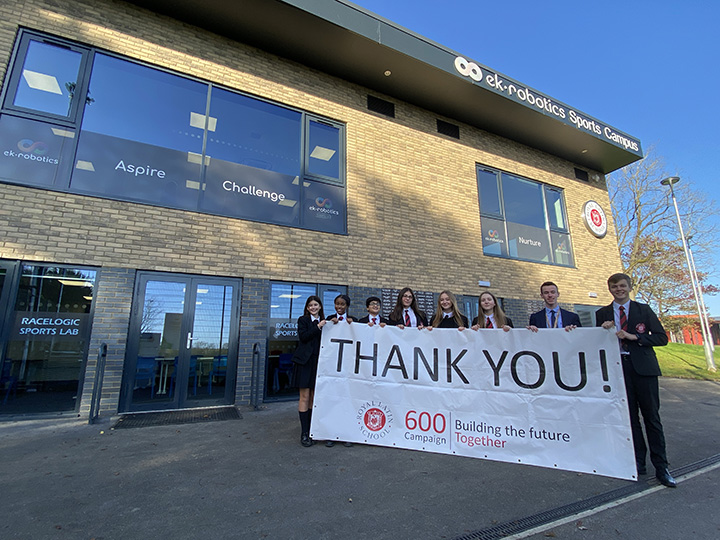 CORPORATE sponsorship has led the way in the building and opening of a new sports campus at the Royal Latin School in Buckingham.

A substantial donation from ek robotics, a manufacturer and system integrator of transport robotics for production and warehouse logistics, has completed the fundraising for the £3 million building.

Other companies have also delivered support. Vitalograph, a leader in respiratory diagnostics and clinical trial services, has invested £20,000 into the project by match-funding fundraising efforts by Royal Latin students. Three businesses have already purchased pitchside sponsorship boards beside the new 3G pitch funded by the Football Foundation.

More than 200 guests, sponsors and supporters of the project – part of the school’s 600 Campaign of fundraising to build three landmark new centres to mark its 600th anniversary next year – joined international sports stars for the official opening ceremony.

Head teacher David Hudson said: “We have long been concerned about the physical and mental health of students and families and this has only been accentuated by the impact of the pandemic. I feel very strongly that as a school, we should be at the forefront of helping everyone understand how physical activity provides a much-needed boost to our wellbeing, helping us all achieve a good balance between working hard and living well.

“I am deeply grateful to everyone who has worked so hard over the last five years in order to make these facilities a reality.”

The ek robotics Sports Campus houses a fitness suite, Mind & Body Zone, and the Racelogic Sports Lab. It will be used by the school during the day and is available to the community during evenings, weekends and school holidays.

The building has been funded by corporate sponsorship, charitable grants and community fundraising, along with support from Buckinghamshire Council. Chris Price, UK managing director of the Sports Campus’ lead sponsor ek robotics, said the sponsorship was the start of a long-term partnership between the company, whose UK headquarters are in Buckingham, and the school.

His daughter attends the Royal Latin and ek robotics stepped in towards the end of the fundraising period in July to ensure the campaign hit its target.

“When the opportunity came up to invest in the future and in the future talent that comes into our industry, we leapt at it,” he said. “It was a pleasure and privilege to be able to help fund such an exciting project that will have great benefits for the future education of our children.”

The facility aims to provide young people and the community with new opportunities to be active. Sports and wellbeing specialists highlighting the benefits of an active lifestyle via a free programme of lectures and seminars.

Racelogic founder and managing director Julian Thomas said: “My business is all about measuring and improving performance. I spent some time looking at the links between physical activity and human performance and was staggered by the volume of evidence out there to show that even a small amount of exercise can positively impact on cognitive ability.”

He said: “It is imperative that we embed positive experiences which inspire people of all ages to be more active. I am so impressed by what the Royal Latin has achieved for school and community sport and I love the way they have brought sporting heroes into the heart of the project.

“This is a fabulous model for other schools and communities to follow.”