YOU ARE AT: Business MK > News > Commissioner calls on employers to back Special Constable recruitment drive

Commissioner calls on employers to back Special Constable recruitment drive 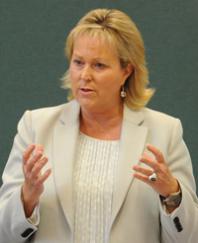 The campaign is being led by Bedfordshire’s Police and Crime Commissioner Kathryn Holloway (pictured) in partnership with the Bedford Business Improvement District.

She wants employers to release staff during working hours to train as Special Constables. In the PCC’s Police and Crime Plan, Commissioner Holloway pledged to work closely with businesses, in particular to recruit Retail Specials to tackle crime against the town’s stores.

Leading retailers have indicated their support for the scheme. Commissioner Holloway and Special Constabulary Chief Officer Wayne Humberstone outlined details of the opportunities to volunteer as a Special Constable at a breakfast forum.

Releasing staff for training will also bring benefits for employers, Commissioner Holloway said. “Specials receive full training in first aid and conflict resolution as examples which can only help any public-facing company, especially when customers are unhappy or behaving improperly. They also get the advantage of individuals developing a problem solving, disciplined, and team-orientated way of working to maximum effect.”

The move follows an increase in crime against retailers. Commissioner Holloway said: “Since the introduction of the 5p payment for plastic carrier bags, it should come as no surprise that stock losses to retailers have soared. Shop owners obviously have a brand new reason to work with Bedfordshire police to up skill their workforce with all the police powers of a fully warranted officer. These Specials would also increase the safety of everyone using the town centre in Bedford.”

Bedford BID represents around 500 businesses in the town. Director Christina Rowe said: “We welcome the Commissioner’s initiatives to improve town centre policing and we look forward to hearing from businesses who want to explore the offer of Special Constables.”

Bedfordshire Police currently has more than 250 Specials who volunteer a minimum of 16 hours per month. The new initiative is on top of the additional regular officers the Commissioner has promised the town.

Comissioner Holloway said: “Some of our largest companies have corporate social responsibility policies which require them to release staff to put something back into the communities where they operate. I cannot think of a more appropriate and mutually useful way to do this than for them to let staff take part in Specials training.”