YOU ARE AT: Business MK > News > College calls in detection dogs to stress zero tolerance drugs policy to students 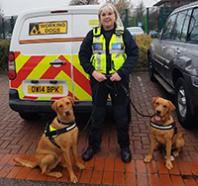 Their arrival was for one of a series of random checks the college carries out. It enlisted the help of security specialist the Ashridge Group, which worked with Thames Valley Police and dog handlers.

Milton Keynes College’s head of infrastructure and estates Nathan Indge said: “The security and safety of our college students and staff is of the upmost importance. We are pleased to report the detection dogs found no hits on the day and there was no disruption to studies taking place.”

National statistics from the 2017/18 Home Office Crime Survey for England and Wales, found that one in five people aged 16-24 admitted to using an illicit drug in the past year.

A detection dog is trained to use its sense of smell to detect the presence of drugs on a person. They can detect even the smallest amount of substances, even if they have been sealed or hidden. They are also trained to ignore common smells such as food and masking odours.

The dogs are licensed by the national Association of Security Dog Users to passively detect users of cannabis, cocaine, heroin, MDMA, ketamine and amphetamines from up to the night before.

Lisa Norris, a professional dog handler who attended the day at Milton Keynes College, said:  “The use of dogs is a growing trend especially at the likes of colleges and construction sites where health and safety is paramount. Some drugs are cheaper to obtain than alcohol now, making measure and deterrents like this all the more important.”

“We will look to run more random checks like this in the future,” said Mr Indge.