YOU ARE AT: Business MK > Education > Code-breaking veterans relive Colossus work at anniversary 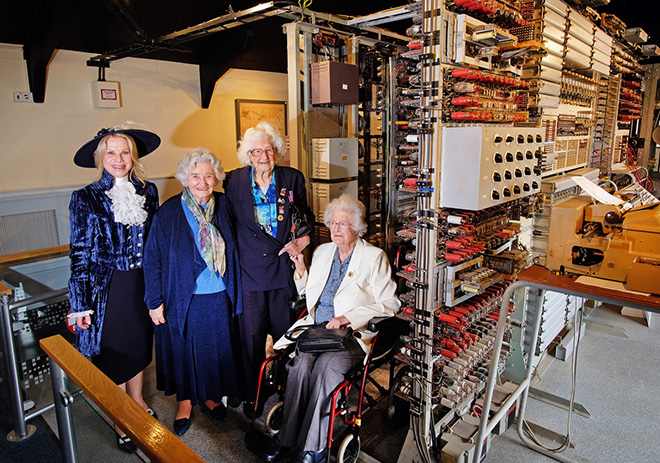 VETERANS who worked on Colossus, the code-breaking machine used to decrypt German High Command messages during the Second World War, came to The National Museum of Computing to celebrate the machine’s 75th anniversary.

On a new Colossus at 75 D-Day display, alongside the world-famous rebuild of Colossus, they saw details of some of those decrypted messages between Hitler and his generals in the run-up to D-Day.

Before an audience that also included relatives of Tommy Flowers and his ‘Band of Brothers’ who created Colossus, cyber security expert Andy Clark, a TNMOC trustee, explained how Lorenz messages of the German High Command were intercepted and decrypted.

Those decoded messages revealed that the Germans had been taken in by the elaborate deception of Project Fortitude and that the enemy believed that the Allied invasion forces would land near Calais rather than the real destination of the beaches of Normandy.

In the past few months, TNMOC researchers have delved through masses of information in the National Archives to uncover detailed intelligence that the Lorenz decrypts revealed with the help of Colossus.

One of examples shown in the new display highlights German unpreparedness for D-Day. On June 5, the day before the invasion, German command reported “As yet there is no immediate prospect of the invasion.” Field Marshal Rommel, a key figure in the defence of the Normandy area, left his HQ to visit his wife. Other commanders were also absent from their posts. They had to return hastily.

The struggle to decrypt the Lorenz messages as they increased in number and encryption complexity was vividly described by researcher Mark Priestley. Even with Colossus, the task faced by the cryptologists was enormous. He described how Bletchley Park prioritised decrypts and delivered the key information to a range of ministries and commands.

The Wrens who had worked in strictly enforced and compartmentalised security knew nothing of this at the time and only in this century have they begun to realise the significance of their work. Irene Dixon, now 94, vividly recalled an event 75 years ago in the run-up to D-Day.

“I was working one night with Jack Good

. He seemed extra happy at our Colossus readings and without telling me why took me into the adjacent room. This was most unusual as I had never been outside of my usual workplace room before.

“Here he used what I now know was a Tunny machine [the final stage in decryption]. As Jack used it, he was obviously ‘over the moon’ with what he had found. We must have had speedy decryptions for the essential incoming messages.”

The new D-Day display can be seen at The National Museum of Computing in the Colossus Gallery, poen Tue-Sun 10.30am-5pm.

Andy Clark said, “We owe a huge debt to the women and men who worked at Bletchley Park during the Second World War,” said Mr Clark. “It was a privilege to be with some of those surviving Wrens and to hear their stories at the anniversary event.

“Our museum focuses on the history of computing. Human stories are at the heart of the history we bring to life. Our aim is to inspire the general public and especially the coming generations of computer scientists and engineers.”

A SHORT HISTORY OF COLOSSUS

GERMAN teleprinter signals encrypted by Lorenz machines were first heard in Britain by police officers on the south coast listening for possible spy transmissions in 1940.

In August 1941, a procedural error by a German operator enabled Colonel John Tiltman, a top codebreaker at Bletchley Park, to decipher a message. Brilliant mathematician Bill Tutte began working on the case and was able to deduce the complete logical structure of the cipher machine now known as Lorenz.

Codebreakers in the Testery, under Colonel Tester, began breaking the codes by hand, but this was very time-consuming.

The head of the Newmanry, Max Newman, a mathematician at Bletchley Park, believed certain aspects of the decryption process could be automated. Initially, electro-mechanical Robinson machines (named after the cartoonist Heath Robinson) were used to find the start positions of the Lorenz wheels to speed up codebreaking. But the Robinson machines had shortcomings.

Tommy Flowers, an ingenious Post Office electronics engineer at Dollis Hill, was asked to improve upon the Robinsons but instead designed Colossus, the world’s first electronic computer which enabled the Lorenz start-wheel positions to be found in a few hours. It greatly shortened the code-breaking process and enabling larger numbers of messages to be broken.

Colossus Mark I began operating in February 1944 and was supplemented in June of that year by the Mark II. By the end of the war there were ten functioning Colossi working around the clock helping to decipher the messages of German High Command.

The deciphered messages provided the Allies with crucial intelligence on what enemy armed forces were plotting. For example, the Allies knew that Hitler had swallowed the bait that the D-Day landings in June 1944 would be at Calais rather than Normandy. This gave the Allies a decisive advantage.

As a direct result of Colossus, the war was shortened and countless lives saved.

By the end of the war, 63 million characters of high-grade German messages had been decrypted by the 550 people working on the Colossi at Bletchley Park.