YOU ARE AT: Business MK > Networking > City needs a football team ‘at the top of their game’, says chairman

City needs a football team ‘at the top of their game’, says chairman 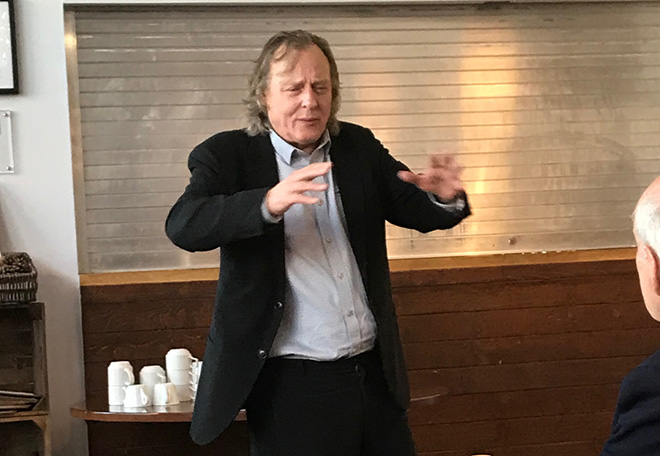 MK Dons chairman Pete Winkelman has spoken to business leaders from across Milton Keynes to highlight the need for the city to come together and help push the team forward.

Opening his address to the audience at the Milton Keynes Business Leaders event, he said: “I’m sorry that I have not been able to get football anywhere near where I wanted it to be.”

Mr Winkelman spoke about his frustration over social media, his plans for the National Bowl and the future of the football club which now has a new manager at its helm.

Mr Winkelman, who realised the new city’s original masterplan of creating a 30,000-seater stadium, stressed the need for Milton Keynes to have a team “at the top of their game,” which would be befitting of a city that, he acknowledged, was incredibly ambitious.

“Milton Keynes is never more powerful than when it comes together to do business, for instance the planning applications for the new cancer centre and the new university. We are the best advocates for our own growth,” he said.

“This city is all about being the best with a spirit to dream big but within football when it goes wrong, it goes wrong quickly. There will be a moment when we find the right manager and we will have an opportunity to move forward and that’s when we will need the city, and local businesses, to get behind us. I want to market Milton Keynes around the world.”

MK Dons is run like any other business, from making the right investments and hiring the right staff, to ensuring that customers were the key focus. However, Mr Winkelman added: “If anyone knows a billionaire, send him my way!”

Stadium MK itself already generates steady stream of revenue through concerts and events. But Mr Winkelman told his audience that providing the club with sustainability and building an infrastructure which will create a premiership team worthy of high investment is at the top of his agenda.

Speaking about the recent decision to redevelop the National Bowl as a training base for the club, he said: “The Bowl is a really big deal and will probably be my last hurrah. We can’t continue to mess with this site – we need to invest in it.”

After two decades of building a football club within Milton Keynes, Mr Winkelman is a prominent figure. However, he cites communication as one of his biggest frustrations.

“Twenty years ago, you could reach a wide audience through just a handful of channels; radio and newspaper. Today, these channels are weaker and social media brings everything down to interest so the message is diluted.

“For instance, unless you are a fervent football supporter you don’t know that MK Dons offers every under 12-year-old a free seat.”

Testament to this is the England’s U21’s game against Austria in October. “The stadium should have been packed but not many people knew about it.”

The MK Dons Carabao Cup match against Liverpool in September, however,  was a sell-out due to the national exposure the premiership team brought with it.

“We need to build a culture of historic support within Milton Keynes but to start with you have to have that success. With the right people, we will get there and then I will need the businesses of Milton Keynes to get behind us to sustain this success,” Mr Winkelman said.