YOU ARE AT: Business MK > News > City escapes housing shortfall 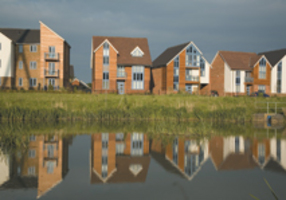 That is the message according to the latest Central England residential development review by property consultancy Knight Frank.

However, the review adds, Milton Keynes is unlikely to see a major shortfall in development as a result of its status as an official growth area and support from national regeneration agency English Partnerships.

The government estimates that housebuilding in the region this year will fall 10,000 short of its target of 41,061 homes. The Knight Frank report suggests that this prediction is overly optimistic, as housing starts for the first quarter of the year were around 60 per cent below the required level.

Liam Bailey, head of residential research at Knight Frank, said: â€œAlthough average prices in the Midlands have fallen by 5% since last autumn, the current crisis in development means that affordability is likely to become even more of a problem in the longer term.

â€œThe longer developers cut back on output, the more grave the situation will become, and not just in terms of sheer numbers. The capacity of the housebuilding industry will be severely damaged and it will take a long time recruit and train the number of skilled employees needed to produce the homes that the country desperately needs.

â€œWhen the housing and mortgage markets return to vigour, the shortage will become a real barrier for anyone trying to get on the housing ladder and will result in yet another spike in prices.â€