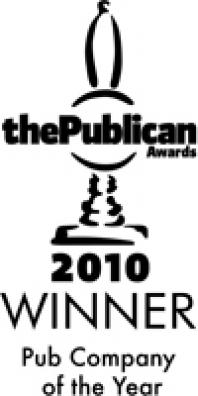 The Publican Awards are seen as the pub trades ‘Oscars’ and recognise the best licensees, pubs and pub company’s from across the UK. Charles Wells was named Pub Company of the Year for tenanted estates of more than 200 pubs – a title it first won in 2009.
Charles Wells managing director Anthony Wallis said: “The pub industry has faced unprecedented pressure in the last two years. On top of the recession, we have had to contend with increased legislation and red tape as well as a sharp rise in beer duty.
"Our response has been to listen to what our licensees and their customers are saying and constantly review whether we are being as effective as we can be.”
“We work hard to provide the support licensees need to help build successful businesses together and make sure that their pub is at the heart of its community.”
The Publican Awards were announced by comedian Michael McIntyre at a gala dinner at London’s Grosvenor House Hotel.
Mr Wallis said: “To win this award once in the face of such extraordinary external pressures was a great achievement in 2009, but to be named Pub Company of the Year for two years running is astonishing. It is recognition for all the hard work that every member of the head office team and every licensee running a Charles Wells pub have put in to ensure we are the best pub company in the country.”
Charles Wells was established in 1876 and runs 254 pubs in Bedfordshire and surrounding counties.