YOU ARE AT: Business MK > News > Charles Wells unveils partnership with American brewery 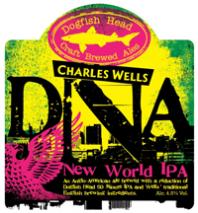 The partnership has announced the launch of Dogfish Head DNA New World, a 4.5%ABV IPA beer available in cask at a number of limited stockists.
DNA has been in development across the ocean for some months will be rolled out more widely in keg and bottle variants later this year.
Tim Sprake, international sales and agency directopr at Bedford-based Charles Wells, said: “While there has been a stream of craft beers coming to market, we have taken a new approach to creating a beer that is a true amalgamation of two internationally recognised brands.”
The beer is the result of a special reduction from Dogfish Head’s popular 60 Minute IPA that has been integrated into Charles Wells’ own brewing process.
“In other words we have taken the very DNA of one beer and added it to the brewing process of another,” said Mr Sprake. “We have produced a beer that is unique and diverse and a little bit special.”
Delaware-based Dogfish Head is to grow and pitch Charles Wells brewing yeast into the United States version later this year.
The IPA, brewed in the ‘Old World’ style, is due to launch at Philly Beer Week at the start of June, when representatives of Dogfish Head and Charles Wells will introduce drinkers to the new beer.
Dogfish Head founder and president Sam Calagione said:  “We have great respect for the people and brewing heritage at Charles Wells and it has been really rewarding to work on this project together.
“At Dogfish we use many culinary-inspired ingredients in our brewing process but borrowing the concept of sauce reduction to intensify the complexity of a beer, while established in the world of gourmet chefs, is a new twist in the world of commercial brewing.”
DNA New World IPA is available as a seasonal cask variant in selected Charles Wells and Young’s/Geronimo’s pubs during April. The brewery describes it as “a marriage of East Coast USA and East Anglian UK brewing credentials.”
Mr Sprake said: “Dogfish Head brings an off-centred approach to the art of brewing and has an incredibly loyal following in the States” continued Tim Sprake. “We believe that by combining the expertise of both companies we have produced a beer like no other that will stimulate interest in both the UK and USA.”