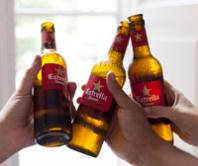 The Bedford brewer has retained the UK sales and distribution rights for a further five years after sales grew by up to 69%.

The two brewers first formed the partnership in 2009, since when sales of Estrella Damm in the UK have risen by 1,100% under Charles Wells management.

Charles Wells chief executive Justin Phillimore said: “We are very proud that our work has built on the great taste of Estrella Damm to drive growth to its current position. We have established a strong and productive partnership with Damm which brings stability and confidence for the future.”

Its growing popularity in the UK means good cash margin for up-market outlets and “compelling” profit potential for retailers, he added.

“By committing to a significant joint investment programme over a number of years, we are able to build on the growth already achieved as we aim for the beer to become the leading premium world lager in the UK.”

Estrella Damm is one of Spain’s leading lagers but was little known in the UK before the partnership with Charles Wells began in 2009.

Charles Wells and Damm have strong corporate similarities with the two family breweries being established in 1876. As both companies mark their 140th anniversaries in 2016, it seems fitting that a combined total of 280 years brewing heritage is still devoted to the continued growth of Estrella Damm in the UK.

This includes TV and cinema advertising, key sponsorships and its established gastronomy presence through the National Restaurant and top 50 Gastro Pub Award schemes.