YOU ARE AT: Business MK > News > Charles Wells rebrands as Wells & Co as work starts on new home 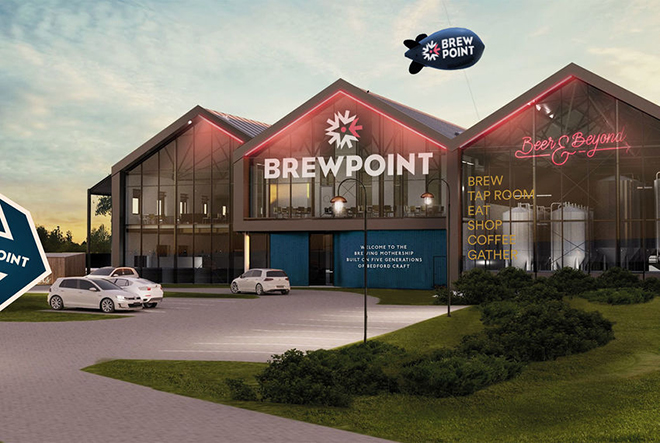 Brewpoint, the new home of Wells & Co in Bedford.

PUB OPERATOR Charles Wells has changed its name to Wells & Co as work begins on its new headquarters in Bedford.

The creation of its new home and the growing investment in its managed pubs reflect its strategy to meet the changing needs of the next generation of customers, the company says, which is why the switch of name for the family-owned business from Charles Wells to Wells & Co. has taken place.

Wells & Co chief executive Justin Phillimore said: “After 142 years and five generations of family involvement, we have not embarked on this lightly but we feel it embodies the change of direction we have taken as a business. This includes the significant investment we are making in our pubs and the creation of a beautifully designed new home capable of producing a range of beer styles that we would not have dreamed of ten years ago.

“It is a statement of confidence about our future direction as a company.”

Work started last week on Brewpoint, a new company home housing a pub-restaurant, a retail shop, a coffee roastery, company offices and a visitor centre  focused around the creation of exceptional beer. It is due to open in early summer 2020.

Brewpoint is being built on a site to the north-west of Bedford at the meeting of the A6 and the northern Bedford bypass.

Its brewing capability will be highly flexible, enabling the creation of a huge range of beer styles. It will have the capacity to make 30,000 hectolitres of beer each year –equivalent to five million pints.

Over the last couple of years, the business has been creating collaboration brews every month with some of the UK’s finest smaller breweries. The resulting beer sold under the Wandering Brewer name has been poured in Wells & Co. pubs since October 2017.

In summer 2020 Brewpoint will start brewing, selecting the most popular of the Wandering Brewer beers to brew, alongside its existing Charlie Wells Dry Hop Lager and Triple Hop IPA beers. The majority of the beer brewed will go to pubs within the company’s own estate.

Commercial director Peter Wells said: “Our family and Bedfordshire heritage remains a key part of our DNA and a credit to what the business has achieved so far. This is such an exciting time for myself and the team, watching this fabulous new site grow over the coming months as we eagerly anticipate opening in summer next year.”

The company has worked on the branding with students from Bedford College and the Bedford agency Eat With Your Eyes, he added. “Together we have developed a standout name and visual image for the new site.”

The site has been designed with sustainability in mind with solar cells on the roof, solar shading, air source heating and cooling alongside a highly efficient modern brewing plant. The car park will incorporate nine car charging points.

Once open in summer 2020, the site will employ over 85 people in the town as well as many more in pubs across the local area and France.