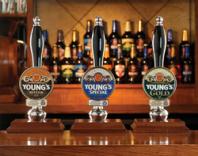 The Bedford-based company has paid £15.1 million for the shares. Wells & Young’s was formed in 2006 following the merger of Young & Co’s brewing operations with those of Charles Wells. Charles Wells already holds a majority 60% stake in Wells & Young’s.

The acquisition will allow both companies to focus on their core business strengths. Young’s will increase its focus on its portfolio of managed and tenanted pubs in London and the South of England, whilst Wells and Young’s will continue to develop new and existing beer brands.

Charles Wells chief executive Paul Wells said: “This transaction is mutually beneficial for both Young’s and Charles Wells. At Wells & Young’s, we are absolutely committed to developing and investing in our beer brands, whilst Young’s is focused on investing in its premium pub estate.

“With Wells and Young’s now a wholly owned subsidiary of Charles Wells Ltd, we will have greater flexibility and autonomy to develop the brewery and its brands.”
The licences granted to Wells & Young’s in 2006 in respect of the Young’s beer brands remain in place and Wells & Young’s is fully committed to developing these brands.
Charles Wells Pub Company and John Bull Pub Company – also 100% owned by parent company Charles Wells Ltd – are not affected by the announcement, Mr Wells said.